Haven’t been blogging as much this week, still trying to get caught up on life.  For now, I’ll catch you guys up on what I’ve been doing, quickly.  Really, it’s not that interesting….

— Got served at physical therapy.
— Got fantastic news at work (still being secretive, people.  In due time…)
— Hit a crapload of traffic driving from Canton to CBC.
— Made it just in time for Cutz.  Ended class with 360 ab pulses.  Yes, 360.  Nobody is ever allowed to moan and groan in my class when I do the ab ladder.  Ever.  Again.

Here’s the workout:  Warmup, Stability Ball Cardio, Sweaty Stability Ball Circuit, Hop Combo, Repeat Circuit, Floor Work, Cooldown/Stretch.  All outlined below, take and use in pieces or all together for your own workouts, and let me know if you need further explanations on any of these moves!

— After Circuit, 9-5 at work.  Anything I want to say about it I shouldn’t on my public blog.  So I won’t.  Even that is too much.  Moving on.
— After work, made a giant tuna and avocado salad wrap and headed to the mall with Trina.  Needed to do a bunch of returns because I panicked about how much money I spent in Colorado last weekend and thought that if I returned some clothes I recently purchased it would make me feel better.  But then I bought underwear.  And ran into Ashley and Bethany in Forever 21!  That was random. 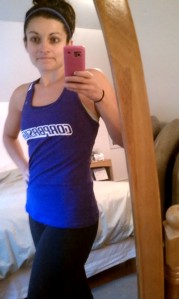 — Iced coffee made.  And this is where I’ll be planted all day, working from home.

— On today’s agenda, besides work items:  clean the bathroom, pay bills, meet with the new health and wellness director at the Y, maybe see an apartment later, and a grill date tonight.

Gotta run, but I’ll  leave you guys with some links of possible interest.  These are links I’ve starred in my Google Reader over the past couple weeks.  Thought you guys might like them too.  Enjoy!

What have you guys been up to the last couple of days?  Any links you would like to share?

Yesterday my physical therapist kicked my ass.  I hope she finds my blog and sees this post.

Seriously, if you want to feel your tush and build up that badonk-a-donk — DO THIS:

Second —  a whole lot of Graston Technique.  Ok you guys won’t be able to do this part, but click that link and read about it.  It’s amazing.  Works wonders.  Hurts so good.

Third — all these strengthening moves:

30 (yes THIRTY) Side Leg Lifts
These are the leg lifts we did in class last Thursday off the step (yes, where you all complained about TEN!) and the ones we did in class this Tuesday lying on the floor.  Where instead of just lifting up and down, you lift up and lower to the front or to the back instead.  Well, I had to do 30 in a row to the front and 30 in a row to the back.  On each leg.  With an ankle weight.  I wish the Y had ankle weights, don’t you?  1 pound ankle weights are NO JOKE.  I can’t even find any pictures of this online to show you guys.  Probably because nobody else believes in this type of torture.

15 Single Leg Bridges
…with a 5 second hold at the top of each one.  Do this on both legs.

15 Regular Bridges
With a band around your legs right above your knees.  At the hold, press your knees out against the resistance of the band.  Hold for 10 seconds, close ya legs, and release.  OW. 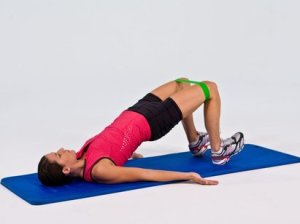 Knee Lifts
With a band tied around a chair on one end and my ankle on the other.  Lift knee against the band’s resistance.  15 times on each side.

Around the World Single Leg Squats
15 reps in each direction (front, side, then back) of around the world single leg squats.  With the damn ankle weights.  I stood on a yoga block to do these.  You could also stand on a step like we did in class a few weeks ago.

Single Leg Straight Leg Deadlifts
15 on each side.  Again with ankle weights.

Sumo Squats
With a theraband tied directly above knees.  Do 15 reps.  Toes and knees should point a little out, unlike the picture below.

…seriously was a sweaty mess by the end of PT.
But I’m not complaining or anything.  Because I love sore butts.  And I cannot lie.

When is the last time you felt that booty BURN?