Is everyone recovering from Halloween?  Who ate too much candy?  You can be honest!  Even if you found that you indulged in one too many of your favorite treats, don’t dwell on it and let it ruin the rest of your week.  Pick right back up where you were!  One cheat day is better than four cheat days, right?

That being said, this year I did not have as much candy as I have eaten in past years.  I didn’t eat any at the office, and I only ate two Reese’s Peanut Butter Cups (my guilty pleasure).  And aside from some beers, the rest of the night wasn’t too bad!  Tim and I went to Slesh & Will’s apartment for a little Halloween dinner, and a Halloween dinner we made!

How freaking adorable are these?!  I got the idea from this recipe, but we adapted it to be our own.

The BBQ sauce added a lot of yummy flavor to this dish, and it was nice to actually use ground beef instead of ground turkey for once.  Was really good, and really filling, and we got in some greens on the side.  Don’t you just love that pepper’s little face?  I feel like this one is the reject child or something.  He’s too cute.

With dinner, we enjoyed some pumpkin brewskis.  Tim and I stopped at The Craft Beer Cellar on our way over to Slesh & Will’s, and brought over an assortment of pumpkin flavored 40 oz. beers in honor of the holiday. 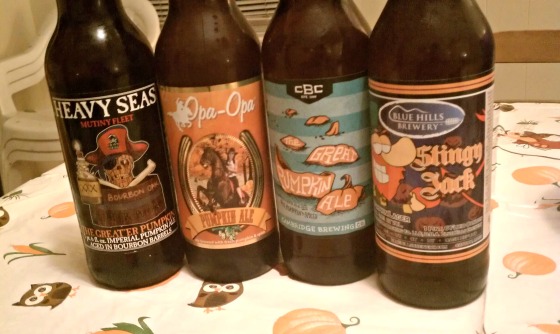 And then finally, a holiday wouldn’t be a holiday without a dessert.  Slesh prepared a Paleo pie crust from the night before (adapted from this recipe)  and we made a no bake pumpkin pie (1 cup pumpkin + 1 cup plain Greek yogurt + 1 package fat-free sugar-free butterscotch pudding mix + pumpkin pie spice).  We didn’t have it in the fridge long enough so it was kind of more pudding like than it was supposed to be, but that’s okay.  It still tasted delicious. 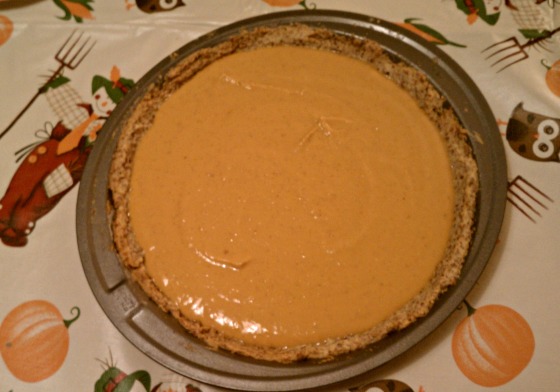 Rest of the night was spent watching Simpsons Halloween episodes and catching up.

P.S.  Will wore his Ghostbusters costume the entire night.  So funny.

Tell me about your Halloweens!  Does anyone have any fun or cute healthy-ish Halloween recipes to share??

I’m off to FINALLY get a haircut… it’s long overdue.  Have a great night, friends!

Hi everyone!  Happy first of the month!  Today’s post is the third in my latest series called “Reader Recipes.”  In Reader Recipes, I am highlighting one F&F reader a month so they can share their fave recipes with all of you.  This month’s recipe comes from reader Shannon, a former co-worker of mine.  Thank you, Shannon, for sharing your reader recipe!

November Reader Recipe of the Month

First a quick thank you to Athena for letting me be a part of her fantastic blog!

In the spirit of fall and the upcoming food oriented holidays, I’m excited to share my spin on Giada’s awesome Sweet Potato Gnocchi with a maple and sage, brown butter sauce.

I came across this recipe three years ago when we hosted my husband Kevin’s entire family for Thanksgiving.  I’m not sure what I was thinking when I offered since Clare was only a month old.  Against all odds and with over twenty people packed in like sardines, we survived and the gnocchi was a hit.  Why wouldn’t it be, who wouldn’t want yummy pasta smothered in a sweet butter sauce!?!?

Since then and the addition of quite a few pant sizes, I’ve learned the error of my buttery ways…sort of.  I don’t have the will power to cut this deliciousness from my life so I found a way to make it healthier-ish.

Here’s the original recipe.  I swapped in whole wheat flour and fat-free ricotta.  I also found that if you want to double the batch, it’s best to just make two separate ones.  We made three batches for Clare’s 3rd birthday party in October!

I hope you enjoy this as much as I do!

If anyone is interested in being featured on Reader Recipes, please email me at akaralekas@gmail.com.  I’m open to any recipes (healthy or not), you just need to be willing to write up a little post about it and photograph your food.  Would love to feature you, and you do not need to be a blogger to participate!