Morning, friends.  This weekend was exactly the kind of weekend I needed.  I’m not going to lie, it was probably one of the unhealthiest weekends I’ve allowed myself to have in a longtime.  In terms of what I ate (lots), what I drank (lots), and how much I exercised (none)…yup, definitely unhealthy.  However, I’m considering it a healthy weekend for the win because it was exactly what I needed mentally.  Mental health is something I don’t write enough about on the old blog, but it’s so important.  I’ve really been missing girl time, which Friday night helped with, and I’ve really been missing relaxing time, which my little overnight getaway helped with.  And you know what?  Splurging this weekend felt freaking awesome.  And now that it’s over, I feel a little more “balanced” and ready to tackle this week with a more positive mindset.

Friday night a group of us went over to Katrina & Geoff’s apartment to celebrate their recent engagement.

We are all so happy for the soon to be married couple. 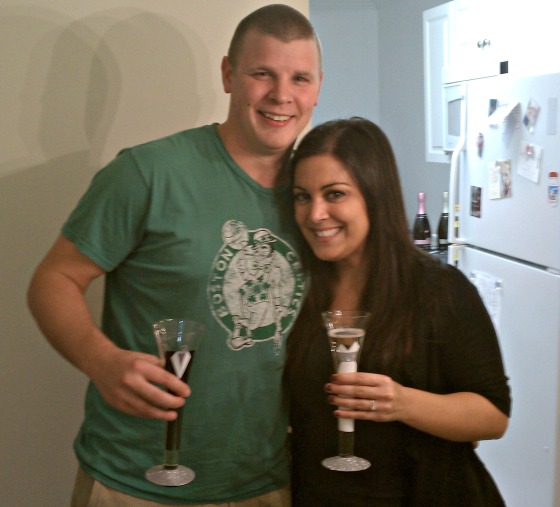 The rest of the weekend was spent up in Portsmouth, NH.  Last year Tim and I used one of our free Marriott nights up there, and we loved it so much we decided that a Portsmouth overnight needs to be an annual event.  I had another free night to use up (one year rewards member right here) and we put it to good use!  Saturday we spent the afternoon walking around the Portsmouth downtown shops.

If you’ve never been to downtown Portsmouth before, it’s so cute.  Portsmouth to us is on the same level as Boulder, CO in terms of how much we love it.  Aka… we would live there.  It’s very quaint with tons of shops and restaurants.  Fun fact – I think Portsmouth is known for being the city with the most bars per square mile in the entire country.  There really are so many places to choose from!  During our shopping excursion, I ended up buying salt and pepper shakers (I’ve been looking for THE perfect cute set and found some that look like owls… they were the ones!), four mini loaf pans, pumpkin spice cheeseball mix from Stonewall Kitchen, 3 bottles of wine from Attrezzi, and an outfit from lululemon (hooray!).  Aside from shopping we did a lot of food and wine tasting, and stopped in at Popovers for a pumpkin spice latte and caramel apple cider.

Saturday night we tried out three different bars and restaurants.  First we sipped a round of drinks on the comfortable couches at Rudi’s Wine Bar. 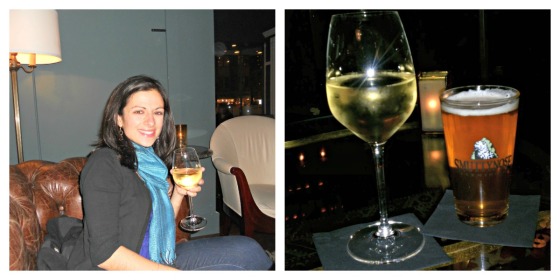 Next we had a wonderful dinner at Radici Restaurant.

I strayed from my normal one out of three rule where I try to choose either bread, alcohol, or dessert… but not all three.  By strayed I mean that I went with all three on Saturday night.  I’m not going to write too much about Radici here because I’m hoping to do a separate write-up on it after exchanging contact information with our waiter.  We really had a great experience there.

After our dinner we went to the Gas Light Company and sat at the bar for the rest of the night.

Let’s just say that by the time we were ready to call it a night we had made friends with the one man band, and Tim started a dance party with the table of four sitting near us.  So funny!

On Sunday, we slept in and then headed to New Castle Island to enjoy the beautiful day and walk around outside.  Look how pretty it was!

It’s not huge, we probably were only there for about half an hour, but it seriously felt like we were walking around Cape Cod.  I think if we go back next year, this would make for picnic material.  Just saying.  We also got to enjoy some fall foliage after being near the water.  Check out my “senior portrait” in the leaves.  Dork alert.

Finally, we wrapped up our overnight getaway with lunch and a brewery tour at Red Hook Brewery.

The brewery is pretty big and has a good vibe inside.  I had a Southwestern chicken salad for lunch and tried one of their Pilsner beers, but I decided Red Hook is not my cup of tea when it comes to beers.  We took the brewery tour for $1 and were annoyed with our tour guide… he was extremely weird and made horrible jokes and over enunciated the last word of every sentence.  But I guess we had a good laugh about that.  Moral of the story is that even though I didn’t love the beer I tried, it was still a fun time and you can add Red Hook to the list of breweries that Tim and I have tried together (Red Hook, Boulder Brewing, Portsmouth Brewery, Magic Hat, Cape Cod Brewery, and Griddy’s).

Rest of last night was spent prepping for the week and then watching Homeland on the couch with a big cup of peanut butter hot chocolate.