Hi guys! Today you have a fun guest post to read from Lindsay! Lindsay blogs over at Lindsay Weighs In to help herself stay motivated and to get support from others on her journey to lose 70 pounds. Enjoy!

Why I Wanted To Become A Runner

Growing up, I was always active. I started playing soccer when I was four, and I played on both club teams and school teams until I was 17. 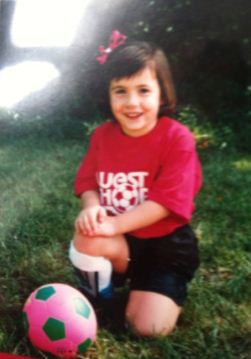 My first ever soccer photo! Age 4. Wasn’t I a cutie?

I quit playing soccer after my junior year of high school, because I was afraid I wouldn’t make the varsity team. Isn’t that silly? I didn’t even try. I wrote it off that I wasn’t going to be good enough, and I didn’t even attempt it. 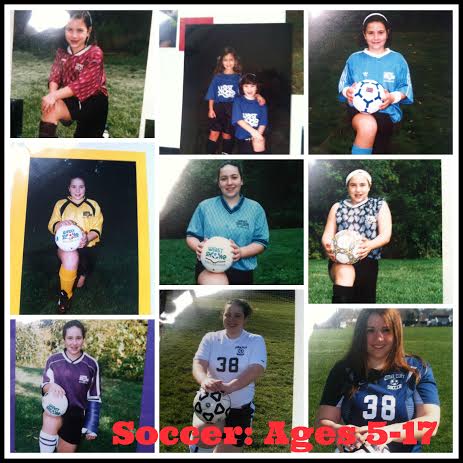 Pretty much a collage of my awkward years, haha!

I’ve never been skinny by any means, but when I was playing soccer I at least had my weight somewhat under control. However, when I stopped playing, my weight started to creep up.

Everything in moderation, right?

When I got to college, it got even worse! There was a dining hall where I could eat wherever I want, and trust me, I was not working out. I’ve never been comfortable with my weight, but in college I became the most uncomfortable. A lot of my friends were in great shape, and I always felt a bit like the “fat friend.”

Shortly after I graduated, I decided to get my weight under control. I lost 40 pounds, and I was beginning to become more comfortable with my weight.

Running my first 5K, at my skinniest, with my friend Keri

However, I was going through a hard time, and again turned to food for comfort. Since then, I gained the 40 pounds back… and then some.

But, I refuse to give up. I haven’t failed until I stop trying, right?

Right now, I’m sitting at 230 pounds, the most I’ve ever weighed.

I still want to become a runner. I want to prove that if you run, you’re a runner. It doesn’t matter what size you are, or how fast your mile time is. It matters that you’re out there, trying.

I signed up for my first half marathon, and I’ll be running through the streets of DC this spring.  I’m going to kick 2014’s boo-tay!

Am I terrified? Of course, but that’s not stopping me.

I’d love to run a full marathon someday, and maybe even a triathlon as well. I obviously have big dreams. 🙂

I may never run a full marathon, do a triathlon, a half Ironman, or a full Ironman. But as long as I’m out there, even running a mile, I’m a runner. And that’s good enough for me.

Chat with Lindsay! Would you classify yourself as a runner? What’s one of your fitness goals?

Thanks for your guest post, Lindsay! You are very inspiring, and I wish you the best of luck with all your running goals.

14 thoughts on “Guest Post: Why I Wanted To Become A Runner”