I have a fun new workout to share with you guys today.

Actually, if you came to class last night at the Y it’s not so new at all since the workout is what I taught in my Interval Training class.  When I was planning class yesterday morning, I opted for a 10-12-15 class format.  Hence the name, the 10-12-15 workout.  Each mini circuit in this workout consisted of three moves: one that focused more on upper body, one on lower body, and one on core.  I also threw a couple of compound exercises in there for good measure.  For each round we did 10 reps of the first exercise, 12 of the second, and 15 of the third.

Because of time we only went through each circuit twice in class last night, but if I were doing this by myself, I likely would have done three rounds of each.  In between each round I threw in two minutes of cardio.  I didn’t plan this part out ahead of time and pretty much just yelled out random cardio exercises to do – jumping jacks, power jacks, fast feet, lateral shuffles, jump rope, single leg hops, mountain climbers, high knees, burpees, etc.  You name it, we did it! 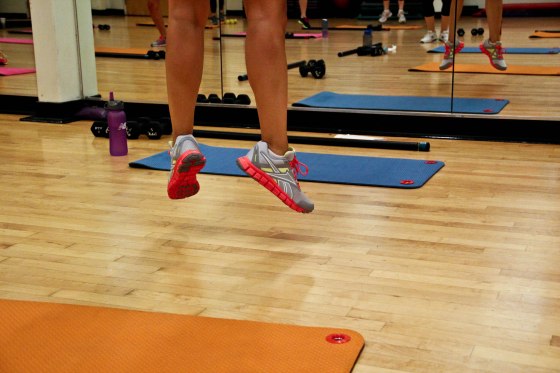 Here are links to the exercises if you are unsure what any of them mean:

Don’t forget that if you are interested in my $50 off coupon for the Ultimate Bootcamp My Nutrition Upgrade program, you need to register this week!  Check out this post for more details and your Fitness & Feta discount code.

I was psyched that so many people were in my class, and I was extra psyched that 12 of them were there through the Y’s March partnership with the Boston Moves for Health initiatives.

I wasn’t lying when I said I ended up with a puddle underneath me!  I was dripping sweat.  Sometimes I judge my workout by how much sports bra sweat I have, and last night my entire sports bra was completely soaked.

To make the cardio and strength sections go by a little faster, I turned one exercise into a “series” or a mini combination.  This helped!  Here are some ideas for the cardio/strength sections if you try this workout on your own: 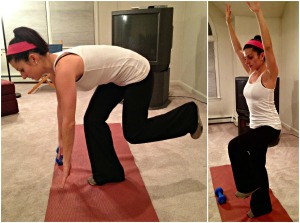 Was a super fun class, and definitely adaptable for workout routines of all levels.  Even very beginners could turn this into 30 seconds > 20 seconds > 10 seconds with the modified versions and work their way up! 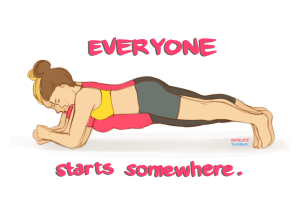 Ever done a 3-2-1 style workout before?  What’s your favorite bodyweight exercise?

I’m thinking about doing another 3-2-1 style next Tuesday, but with equipment!  And maybe swap the 3 minutes of cardio for 3 minutes of strength.  We’ll see!

Tabata.  If you take my classes, you already know all about it.  You may love it, you may hate it, you may even hate that you love it or love that you hate it.  Whether I’ve already exposed you to Tabata or you have no clue what I’m talking about, I’m hoping this post will teach you something new.  It’s a longer read than usual, but worth it!

The second workshop I attended at Boston Mania was probably one of my favorites the entire weekend:  Tabata Bootcamp with Mindy Mylrea.

Before I get into the specifics of Tabata Training, let’s talk about Mindy and how awesome she is.  She was by far my favorite presenter at Boston Mania, and I took two workshops with her on Friday.  She’s happy, hilarious, tells dirty jokes, and has so much energy!  If you are not familiar with Mindy (famous name in the fitness world), I highly recommend checking out her website here and buying some of her workout DVD’s.  She’s awesome, awesome, awesome.

Mindy started the workshop with a lecture that gave some history of Tabata and how it’s become the “hot thing” in today’s exercise world.  If you are an F&F reader who ONLY does steady state cardio on the same machine day in and day out, that’s great, but… pay attention.

Steady state cardio USED to be the end all be all for weight loss.  People used to (and some still tend to) think that the longer they just stay on a machine, the better the workout.  Wrong.  When you do a cardio session at the same pace for the entire workout duration, your body ADJUSTS to the speed you are going and actually tries harder to conserve energy so you can keep going.  And guess what energy comes in the form of?  Calories.  So what is the point of CONSERVING calories during every workout?

**Note:  I’m not saying to NEVER do steady state cardio.  If you are already a fit person who exercises regularly,  pretty much one steady state workout a week to keep your lungs in check is all you need as part of your regimen among other training.  And if you are a beginner, steady state is a great place to start.  It does still have health benefits and is better than nothing.  This is about how to take it to the next level.**

After steady state cardio was all the rage, interval training was introduced.  We talked a LOT of science here – how interval training that lasts for longer than 20 minutes can certainly be harder intensity, but it’s still in the cardio realm because it uses oxygen and the body still never fails because it doesn’t need to readjust.  We talked about the lactate threshold and reaching your VO2 max (told you lots of science), that “grey area” between aerobic and anaerobic exercise.  Athletes started realizing they could be better if they could sustain activity in this lactate threshold area longer… basically on the “verge” of failure.

Then came HIIT, high intensity interval training.  This type of training takes you into the anaerobic zone.  It consists of 20 minutes of less of training time and focuses on exercises that use major muscle groups and compound movement.  HIIT taps the energy sources INSIDE the muscle, and it works better for fat loss than steady state because it creates a prolonged after burn, or EPOC (excess post oxygen consumption).  This type of training causes the body to take longer to return to its state of rest, so it continues to burn calories at a higher rate long after the workout session has completed.

So!  Tabata itself is a type of high intensity interval training that is very simple but very intense.  The training time is only 4 minutes, but it should be the 4 hardest minutes of any training routine you will do.  After a warmup, an exercise is performed to failure for 20 seconds.  There is then a 10 second rest followed by another 20 second bout of intensity.  There are 8 cycles of this to form the 4 minutes.

Think about it.  If I tell you that you have a whole minute to do burpees, you most CERTAINLY are not going to work as hard.  The mindset is “Oh, I have an entire 60 seconds.”  But if I tell you that you only have 20 seconds, the mindset shifts to “Shoot, I only have 20 seconds.”  Then you dominate those burpees as hard as you can.  Magic.  Mindy said it was like having 8 orgasms in a row.  Thoughts?  Maybe if Ryan Gosling is involved?

Mindy’s Tabata Bootcamp workshop taught us how to design an hour-long class using the Tabata Protocol.  Since there isn’t any way you could do JUST Tabata for an entire hour (if you are, you aren’t doing real Tabata – it defies the science behind it), she taught us to design classes using three TYPES of Tabata:

She also ran through a Tabata checklist for success, basically how to decide what exercises to use in a Tabata Bootcamp class:

Then we got moving!  And shaking, and groaning, and… wait a minute, maybe Tabata really is like an orgasm!

Mindy had us practicing different Tabata exercises using the ropes, gliding discs, and bender ball.  I ended up buying this equipment at the end of the workshop because it was a great price ($40 for 2 DVD’s, the gliding discs, and the ball) and I wanted to buff up my at home workout equipment collection.

We did a quick warmup, then four rounds of Tabata for a sixteen minute workout.  Doesn’t seem like a lot, but THAT’S THE POINT!  What is everyone’s #1 excuse for not exercising?  Not having enough time.  But with Tabata you get the same, if not MORE benefits, of that longer workout you don’t have time for.  Here are the rounds Mindy took us through: 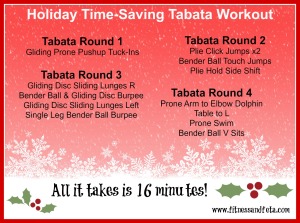 Also, make sure to warm up properly and take rest as needed!!!  Again, this is not for the novice exerciser.

So what do you guys think?  Anybody out there still doing steady cardio all the time?  Do you do any Tabata as part of your workout routine already?  If so, what’s your favorite exercise to incorporate into Tabata?  If not, will you start adding it in?  Anyone use gliding discs and bender balls regularly?