This week we got so many fun fall ingredients in our CSA delivery. Have I mentioned how much I love the fall? On Tuesday night, Tim and I spent a lot of time together in the kitchen, and I put together a salad to have for lunch the rest of the week. I wanted to use multiple ingredients in one meal, and I chose to use the kale, beets, and pears. 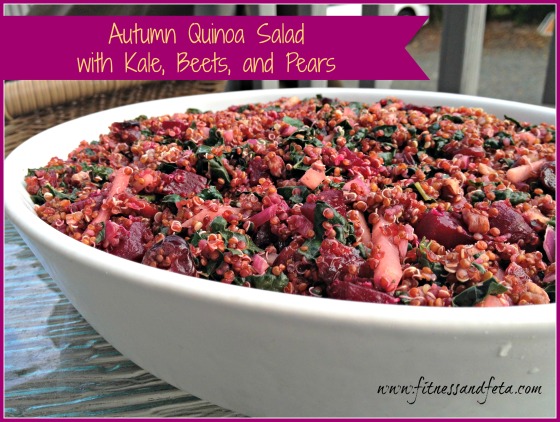 One thing I think people often overlook when they make a dish is not the flavor of their ingredient selection, but the variety of textures used. Since the quinoa, kale, and cooked beets all share a similar consistency, the pears added a unique mouth-feel to this salad. They weren’t overly ripe yet, so the crispy and juicy combination worked to our advantage. 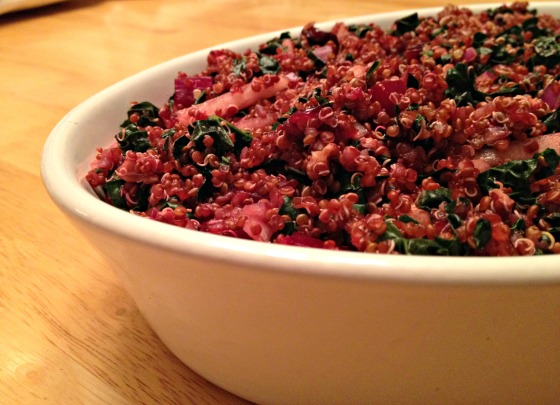 Even though I’m calling this my autumn quinoa salad, I think it would make a festive addition to any holiday table in a couple of months! Isn’t it pretty?

–Let’s chat–
Do you ever think about the consistency or texture of the ingredients you cook with? What ingredients (besides pumpkin and apples!) come to mind when you think of fall?

One last thing today… congratulations to two of our dearest friends, Cate and Joe, who welcomed their new baby girl, Brynn, into the world yesterday. We cannot wait to meet her!

Three items we’ve been getting a lot of in our CSA lately are cabbage, kale, and kohlrabi. Our fridge was starting to overflow with these veggies last week, so we combined them all into one dish and made a slaw. Whenever we make slaw, I tend to eat it as a salad base, but Tim gets psyched for sandwich time. We just stick a big batch in the fridge and use it in our preferred ways throughout the week!

Mix the cabbage, carrots, kale, kohlrabi, and parsley in a container or bowl. In a separate bowl, whisk the lemon juice, olive oil, apple cider vinegar, and s&p. Drizzle the mixture over the slaw and enjoy!

I love that this slaw is light, crispy (the kohlrabi really adds a nice crunch!), and still flavorful without using any mayo. You can enjoy slaw in many different ways, but last week we ate it with a variation of this slow cooker peach BBQ pulled chicken recipe. Our variation was sans rice and with Tim’s homemade BBQ sauce (less sodium than buying BBQ sauce from the jar). The chicken and slaw combo lasted us several meals too.

Try it out, and let me know what you think!
–Let’s chat–
Do you eat slaw? Do you have any go to ways to make slaw or eat slaw? In your homes, do you ever make a big batch of something, just to eat it in a few different ways?
P.S. Not sure how the heck to cut up a kohlrabi? I thought it was an alien when I first saw one, but this post really helps!

Exciting news!  And it has nothing to do with the royal baby.

…I finally found a kale smoothie that I actually like!

Okay, maybe that’s not that exciting to most people, but it is to me.  I’ve been on the hunt for the perfect kale smoothie for what feels like a long time now, and I was just about to admit defeat and announce that kale smoothies just aren’t my thing.

But then this little sucker saved the day.

Serves 1 or 2, depending on how much smoothie you like to drink!

Combine the coconut or almond milk, kale (make sure to massage first), frozen pineapple, banana, protein powder, yogurt, and flax seed in a blender.  Puree until smooth for at least one minute. Add water and/or ice as necessary to reach your desired consistency.​ 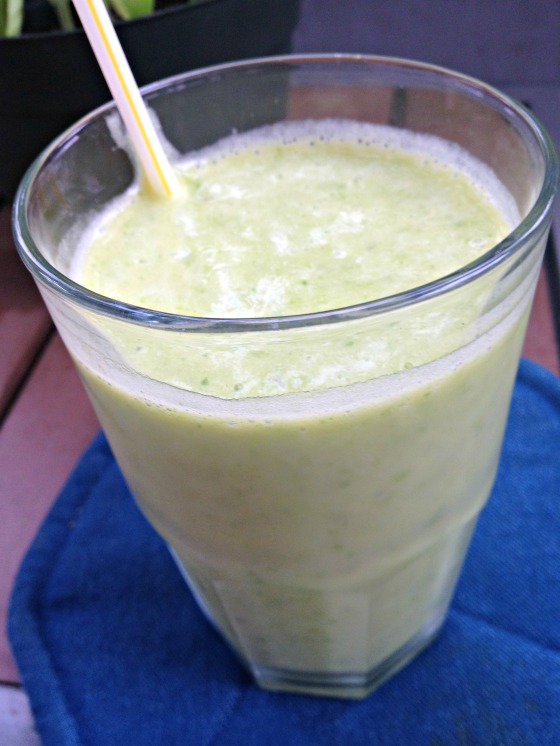 This was refreshing and made for a great snack during one of the 90 degree days last week.  Unlike the other kale smoothies I’ve tried, this one has enough other flavors that you can’t taste the kale in the smoothie.  I’m glad I didn’t give up on kale smoothies because kale is SUCH a nutritional powerhouse.  Plus, we’ve been getting some in our farm share the past couple of weeks, but because I’m only bringing home 25% of the produce, I haven’t had enough kale to actually make a full entrée with it.  Smoothies and single serving salads have been my go to!

Anyways, I don’t think this smoothie has enough protein to hold me over as a whole meal, but it’s definitely snack worthy!  If you try this one out, let me know what you think.

I still haven’t planned class for tonight… any requests!?